Single sign-on, often known as SSO, is a session and user authentication service that enables users to access different apps with a single login credential, such as a name and password. SSO may be used by companies, smaller organizations, and even individuals to simplify the maintenance of multiple identities and passwords for numerous online accounts.

A simple web SSO service’s agent module on the application server gets a user’s particular authentication credentials from a specialized SSO policy server and authenticates the user against a user repository, such as an LDAP directory. This is done while the user is being authenticated against the user repository. The service verifies the end user’s identity across all of the apps to which the user has been granted access, and it prevents other password prompts from appearing for individual applications while they are being used simultaneously. 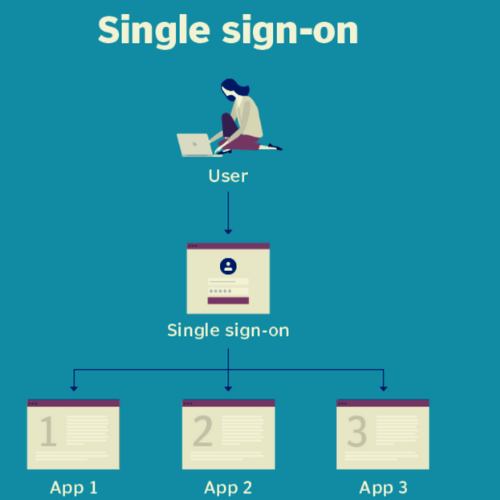 This diagram illustrates a single sign-on.

Kerberos and SAML are used by several SSO services (SAML).

Users will enjoy single sign-on simplicity, but the company’s security will be compromised. If an adversary is successful in obtaining possession of a user’s SSO credentials, that adversary will be given access to every application to which the user has permission, which will increase the amount of possible harm. It is necessary for each component of the SSO implementation to be paired with identity governance to prevent unauthorized access of any kind. Improved security may also be achieved by combining single sign-on (SSO) with either two-factor authentication (2FA) or multifactor authentication (MFA) for organizations.

SSO services from Google, LinkedIn, Twitter, and Facebook let users log in to third-party apps using their social network credentials. Social single sign-on is convenient but presents a single point of failure that attackers may exploit.

Because an attacker may access apps that utilize a user’s SSO credentials, many security experts advise against utilizing social SSO services.

Apple launched its own single sign-on service as a more private alternative to Google, Facebook, LinkedIn, and Twitter. Sign in with Apple. The new service will restrict third-party data access. To enable Face ID and Touch ID on iOS devices, Apple’s SSO will require 2FA on all Apple ID accounts, increasing security.

Password managers with client and server components are included in enterprise single sign-on (eSSO) software products and services. These password managers allow users to log in to target apps by replaying user credentials. These credentials are usually always a username and password, and target apps do not need to be updated in order for them to function with the eSSO system.

Advantages and disadvantages of SSO

One Sign-On allows customers to remember and manage fewer passwords and usernames for each application, which is one of the many advantages of using SSO.

Disadvantages of SSO include the following:

Benefits of single sign-on in healthcare

Does the healthcare organization you work for realize the value of products that just need one sign-on? Discover how to rapidly log in to various programs without much difficulty for people working in the healthcare industry.

Despite regulatory compliance issues, several healthcare businesses have used cloud services. Those services need more users to log in to many apps and systems in diverse contexts. This prompted IT organizations to search for identity management technologies that can handle cloud and on-premises authentication while boosting healthcare users’ security and efficiency.

Healthcare practitioners’ devices should be secured to safeguard patient data. Users may reduce data breaches by changing passwords regularly and making them complicated. Users must remember complicated passwords for various platforms, which is beneficial for security but difficult for users. Users often waste time logging in and changing passwords due to the number of password restrictions per application. Thus, healthcare has seen the advantages of single sign-on (SSO) systems grow. A healthcare SSO lets consumers use one account to enter several apps without remembering passwords.

Many application providers are now permitting identity federation, which means that not all authentication is completed by entering a username and password at a login page. This is the mechanism via which a single sign-on (SSO) may securely connect with an application in order to obtain a security token for a user and authenticate that user without having the user to manually submit their account information.

The benefits of single sign-on in healthcare

Healthcare SSO products may report access logs centrally. That helps with HIPAA compliance and lets you see when and where users spend the most time.

Before choosing one, IT companies must examine how the best SSO systems will support cloud services, mobile users, and security. Medical institutions must estimate the long-term ROI of a healthcare SSO platform. According to critics, SSOs may reveal account data from numerous systems if compromised. SSOs reduce risks since non-SSO users repeat passwords for internal and external apps and keep them in insecure places.

What is the Metaverse? – All You Need to Know

What is Blockchain technology, How does it Work ?

What Is artificial intelligence (AI)? and How It Is Used