download the 9 games sony gives away for PS4 and PS5

You can now download the nine games sony gives away for PS4 and PS5: if you claim them you’ll keep them forever

A few days ago Sony announced that, on the occasion of the Play at Home initiative, it was going to give away nothing more than ten games: nine indies and a triple-A of the likes horizon: Zero Dawn’. To get the Guerrilla Games game you will still have to wait a bit, but the nine indies games can already be added to the library and downloaded to our consoles.

Below we will list and link all the games that can already be downloaded, not without first highlighting two aspects. The first is that you don’t need to have a PS Plus subscription to add them to your account. The second is that if you claim them now you will keep them forever. They’re not like PS Plus games, which are no longer available if you don’t renew your subscription.

As noted above, the games that we can already download are the nine indies. They will be available from today, March 26, until April 23rd. ‘Horizon Zero Dawn’, on the other hand, can be claimed from April 19 to May 14. Below is the full list of indies: 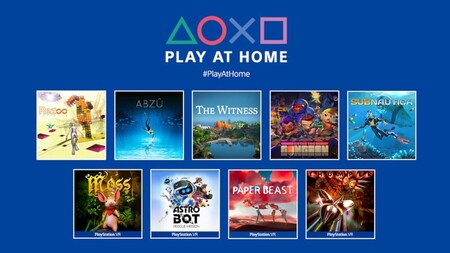 All games can be played on PS4 and PS5. Obviously, those marked with “for PS VR” require Sony virtual reality goggles. In that sense, it should be remembered that Sony is working on a pair of PlayStation 5 glasses of which, for now, we only know that they exist and that they will have the most peculiar controls.

Recently, Sony has given away‘Ratchetand Clank’, which is expected to be a new title dubbed’Ratchet and Clank: ASeparate Dimension’ (which has no release date yet but can now be booked on sony’s website)and uncharted: The Nathan Drake Collection. Sony promises more games in the future, so it’s time to stay tuned.